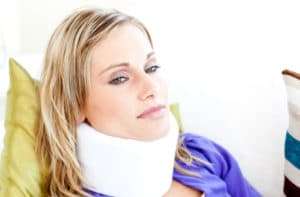 Whiplash is a common injury for people involved in car collisions. When a car is struck from behind or collides with another object, it causes the neck to snap back and forth violently. This causes the muscles and ligaments (including the Intervertebral Disc) to overextend, leading to strains and/or tears.  This is referred to as soft tissue damage, and can cause stiffness and soreness. Whiplash can also cause structural damage such as misaligned vertebrae, herniated, bulging or ruptured discs, or nerve damage due to the overextension from the violent movement.

Gonstead chiropractic can help with both types of injuries. Gonstead adjustments can be performed specifically for those who have been in car accidents and suffered from whiplash. The pressure on the discs and nerves is released when the spine is returned to its proper alignment, preventing nerve and disc damage.The most important time to get checked by a Gonstead chiropractor after an accident is roughly three days.

If you are under regular Gonstead chiropractic care, you should be seen shortly after the accident.  The small delay in care will have given the upset structures a chance to settle down a bit so a more accurate xray may be taken.  However, waiting too long after an accident may cause structures to mal-adapt and begin the degeneration process.  Many people after accidents wait 10, 20 years or even more before seeing a chiropractor years later when they have neck pain. Yet, the problem began in an accident as a teen.  At that point, the amount of degeneration that has taken place during this time will never allow a full recovery. If you have been in a car accident, call and schedule a consultation with your San Diego Gonstead chiropractor in Carlsbad to see if you qualify for care.